Velfarren Encounters: Berrian and his sister

2 miles off the King’s Road, with the last light of the day, a rider came up on the trail of the Fairy Ring, having pushed his steed hard all the way from Winterhaven. Dismounting, the chainmailed spearman introduced himself as Fosden, a priest of Pelor the Sun Lord.
“‘Fosden of the Cliffs’,” Cram greeted him. “I know you from Fallcrest. First man ever to scale the Drachensgrab Cliffs (or first civilised one), and now a priest. Have you come to join my party?”
“Not if it’s a the sort party you hold in the Blue Moon Alehouse,” he smiled. “But I’m glad to have caught up with you.” Fosden told that he had accepted the charge of the voluble dwarven High Priest, Grundelmar, to investigate Gardmore Abbey.

[ Gary, did Fosden give more details about what’s supposed to be there, or about the paladin who’s expected up from the old capital in a few days’ time? ]

Though they had different goals, all agreed that they should approach the ruined abbey together.
“When good is divided, evil prospers,” quoted the priest.

Varris picked them a cautious route over the Gardbury Downs, clear as day to his elven sight, and by the light of a moon just past the full, the night gave none of them any difficulty.
By midnight they beheld the ruins of Gardmore Abbey on the next hilltop, a dark outline against the moonlit clouds. On the eastern flank of the hill flickered a number of fires, and at its base a mighty defensive wall reared up five times the height of a man. Cram favoured approaching the gatehouse, but the wall did not encircle the whole hill. It ended with a last watchtower at a point beyond which the steepness of the hill itself protected against any military assault. Percival pointed out that though an army could not launch an attack that way, a group such as themselves should be able to negotiate it. Fosden too was keen to make the climb, but Varris pointed to a place where the wall had been breached and never repaired, beyond which the slope of the hill was covered in forest.

With Varris leading again, they made their way through the wide breach and into the forest., unobserved by any watcher, and finding no sign of any others passing this way with any frequency. In low tones the ranger declared that this was more than a natural forest. It was denser and more vibrant with life not all of it just what was normal for these climes. He believed it touched by the Feywild. They stole forward through the heavy undergrowth beneath the trees, until they heard movement just ahead, and saw several figures moving to cover behind the trees around a glade.
“Hold, brothers. We do not know their intent,” came a whispered command in refined tones of the elven tongue.
Varris stepped forth, and promptly found the strangers to be High Elves of Wjizzo’s folk. But though he looked to Wjizzo to speak, the wizard was intent on divining the nature of this place’s connection to the Feywild, and simply shook his head.
“What is your business here?” demanded the leader, stepping forth. “Speak quickly or fall where you stand.” His long straight hair, his hauberk of fine chainmail and the naked edge of his longsword glimmered like quicksilver in the moonlight.
Varris introduced himself in elvish, but when the haughty ones failed to be impressed by his unpolished silvan accent he switched to the common tongue.

They were bidden forth out of the trees, and found themselves before the ruined shell of what must once have been some manner of shrine. At its centre bubbled a font, with a mosaic encircling its base, depicting a platinum dragon and a silver stag in eternal chase, all marked out with exquisitely tiny magical runes.

Varris explained their mission for Lord Padraig to the half-dozen high-elven knights. 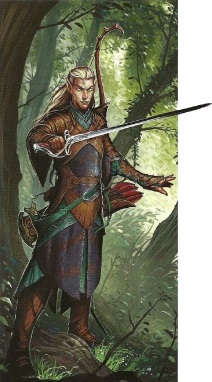 The fey knight leader gazed upon the clear waters of the font as he contemplated a moment, and then gave his own introduction.
“I am called Sir Berrian, and my house is Velfarren. For a century I have searched the wide world over in a quest to discover the mystery of my father’s fate and pay a son’s proper tribute to his memory.
“All roads have led me here, to this human ruin. But once again they diverge and lose themselves in the fog of time, and though I near their ends I cannot see them clearly even now. Do they lead to dishonour? Vengeance? Death? It is impossible to see.”
(“Varris could help you with two of those,” Percival muttered, soft enough for only Cram to hear.)
“The dark abbey crawls with perils, and orcs and giants infest the grounds. A frozen thing in white robes sometimes lingers near the font, staring into the memories its waters contain. And in the shadow of yonder doorless evil tower, this place confounds us with its mysteries and dangers.” A nod indicated the watchtower back through the trees behind them.
“The grove is vibrant with the life of the Feywild… of home. But the closer we come, the farther we fall away. Fey beasts lair in the ruins. Gossiping nymphs tantalise us with secrets. And now my sister, Analastra, too has vanished, thus halting our sacred quest until she can be found.”

Learning that Analastra had been gone only a few hours, and perceiving that the seemingly capable high elves were nonetheless for some reason unable or unwilling to seek her themselves, and inclined however reluctantly to be grateful if they received help, the adventurers vouched their assistance.
The superior demeanour of the high elves dropped for a moment of surprise and respect when Varris identified the direction that the elf-maid had taken, clad in stout armour and bearing a shield, he added.

The wood elf followed a trail imperceivable to his companions, up and down the steep forested hillside, through a thick, riotous tangle of trees, bushes, vines and ferns that had a wild and ancient feel belied by an occasional fragment of tiled pathway beneath the moss or an ivy-clad stone bench. They followed a seemingly purposeless route for half an hour, during which time it seemed impossible that they never emerged from this small stand of forest. Squirrels and birds chattered and chirped in the branches, bees and iridescent butterflies drifted amid blossoms, and the tracks of larger creatures crisscrossed the wood. “The knight mentioned fey beasts,” said Varris at one point. He toed aside some scratched earth to reveal shallow-buried droppings. “This looks like the work of a great cat, a really large one. And there has been more than one sign of something else larger still, but I have no idea what.”

And then, “There!” he hissed excitedly.
They saw a pale, slender figure with long silver hair speeding towards them through the dark grove, footfalls making hardly a whisper. She dared a glance over her shoulder, gasped in alarm, and veered sharply aside towards the curving wall of a tower.

Two feline monsters drew close upon her heels, black forms that somehow defied the eye, but seemed possessed of too many legs. Then a pair of spiny tentacles lashed forward from the back of the lead beast and dropped the fleeing figure with an agonised shriek. 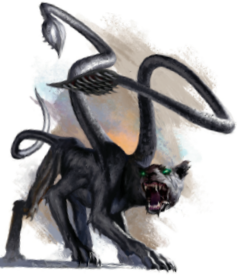 Fosden charged past him to thrust at the flank of the beast looming over the fallen elf, but his spear inexplicably seemed to pass through nothing but the air. The black panther-like thing hissed at bay, straddling its fallen prey with no fewer than six legs and baring its fangs, as the nearer of its tentacles flashed out and struck Fosden a nasty blow. 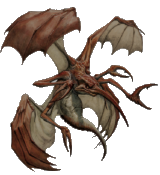 A dark shape dropped out of the sky from somewhere up at the eaves of the ruined bell tower, pulling up to skim the ground and punch into the fallen elf-maid. Four bat-like wings folded away to reveal a dog-sized monster that seemed a mass of grasping pincers.
“A dire stirge!” cried Wjizzo. “Watch out for more of the pernicious vermin!” His unerring magic missile elicited a shriek from the thing, but did nothing to loose its hold on the fallen elf.

Varris followed the sun-priest, invoking the Orb of Light and slashing out. He too failed to draw blood, but a white flash cowed the beast. With vein-popping anger, Cram threw himself forward between both panther-beasts, swinging his fullblade around a full arc which missed the other beast, but struck the cowed one true and staggered it back.
Fosden dared a moment forsaking his spear and raising the golden sun-medallion on its chain around his neck. “Aid us, Spirits of Righteous Pelor!” he cried, undaunted as a barbed tentacle grazed over the links of his chainmail. A succession of searing golden rays curved out of the medallion and struck his attacker with burning force, making it recoil with an anguished yowl and then slump lifeless to the ground.
“We give thanks, Sun Lord, but give us also the strength to endure.” The prayer buoyed Fosden up, and probably saved his life as the dead beast’s mate flashed between the adventurers, heedless of all the drawn steel, tentacles lashing left and right. One spiny tentacle raked across Fosden’s neck and chin. Cram grunted in pain as he was struck along the hip, and then the stirge sprang up from Analastra and drove its pointed beak-snout into his back, pincers locking it tight up against his body.

Percival seemed to have anticipated the displacer beast’s move, and appeared out of nowhere to strike with his wicked dagger, but his target’s innate glamour of blurring thwarted his aim.

A second stirge shot down onto the exposed target of Analastra, but Varris was there and struck it a swingeing blow.

Cram whirled his fullblade about in a great circle that did nothing to the monstrosity on his back, spinning around with him and sucking the very blood out of him, but the weapon striking through such an arc was not to be confounded by any trick of fey magic and he dealt a great blow to the second displacer-beast.

Onwards and upwards Where they reach Dragon's Roost

The Pursuit of Paldemar In which Paldemar himself was finally taken