Where they reach Dragon's Roost

A wounded displacer beast marauding through the mêlée, and stirges locked onto Cram and the fallen elf-maid, Fosden, Wjizzo, Percival, Varris and Cram fought on.

Fosden called a second time upon the Sun Lord to give him the strength to endure, and immediately the pain of his wounds left him. Stepping forward, he stabbed hard at the stirge feeding upon the blood of Analastra, and then the air around them was filled with the shimmer of Wjizzo’s magic. Fosden’s target slumped lifeless upon Analastra, and Cram’s tormentor let out an anguished shriek.

The displacer beast leaped back into the fray, its glamour of elusion defying all attempts to swing out at it, and its tentacles flying. Varris brought up a twin-sworded guard to fend off one attack but Cram, suffering from loss of blood was not so lucky and a raking strike sank him to his knees. Percival doggedly pursued it and as it struck, so too did he, Stanley the Knife crippling one of its hind legs. It recoiled in pain, and Varris mercilessly slashed down across the back of its neck to fell the monster. With two steps he brought his other sword down to strike dead the stirge upon Cram’s back, and with elven grace he struck yet again at a third stirge even as it swooped in upon Analastra, grievously wounding it.

Fosden impaled the injured stirge upon his spear and lofted the lifeless corpse clear of its victim, and in the moment that he looked around for any other attackers, he was poised like a knight raising a grisly standard. But there were no other threats, beyond a flurry of smaller stirges around the tower, that had more sense than to venture anywhere near the victorious adventurers on the ground.

Fosden inspected the extent of Analastra’s wounds, and declared that she should not be moved. Wjizzo doubted her plight could be so grave, and even as Varris was proposing to go for the assistance of the High Elf knights, Analastra came round. 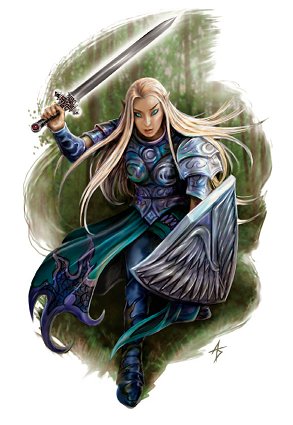 Blinking, she awoke.
“Thank you,” she said in a voice bright as silver. “You have saved my life, and I am deeply in your debt. Come, if you return with me to my brother here in the grove, he too will be grateful for your heroism.”

After regaining their breath and bandaging their wounds, they allowed Analastra to lead the way back to the High Elves’ camp. She took them by a different route, which she said was the most direct, but which nevertheless took them several whole minutes to traverse. She explained that she had been ranging the Feygrove to ensure a quick death for any orc that might enter beneath the trees when she had stumbled upon the displacer beasts, and inadvertently drawn their ire where normally she and her companions left them alone, since they were every bit as effective at slaying orcs as she.
At Varris’ query she explained that the other, larger, fey beast of which he had seen sign would have been an owlbear. At least one of the ferocious predators hunted the Feygrove, and she suspected there might be a mated pair. Wjizzo was tactfully silent on this, but Varris said that his clan had known of owlbears in the Harken Forest and knew them for aggressive brutes with enormous claws that grab and bite their prey, and are possessed of a screeching cry that can stun a person in their tracks.

Sir Berrian retained his prideful manner, but expressed his sincere gratitude for the adventurers’ saving his sister’s life. The beverage that had conspicuously not been shared in their first confrontation was now served up to one and all.

With only a little prompting from his sister, and with Wjizzo this time properly engaging in conversation, he was a little more forthcoming about his group’s purpose in the Feygrove. He did not know what mystery his father, Zandrian Velfarren, had pursued when he left the two children with their mother, centuries ago. But his trail led here, where it promptly grew confused, as some force in the Abbey Mount defied, and continued to defy, their attempts at divination. Berrian’s suspicion was that his father had been involved in husbanding the force of the Feywild that so filled this place, and he would very much like to find some sort of evidence of this.
“The plants that thrive in this grove, and the creatures attracted to it — they are not of this world. My ancestors had a hand in taming a wild force here, and we therefore have some measure of a claim to it. If there were more certain proof specifically of our father’s hand in this, perhaps amongst the written records of the humans, we would very much like to know of it. "

The Fairy Ring acknowledged the charge that the fey knight placed, ever so lightly, upon them and promised to share with him anything they learned. But their goal now was atop the mount on the ’Dragon’s Roost’. Analastra looked keen to accompany them, but Berrian remained firm that she must remain in the camp to fully recover from her injuries.

“Can she not be availed of the powers of the healing waters in this pool?” challenged Wjizzo. “I did not speak sooner, because I was studying the runes upon the tessera of the mosaic. But I believe there is a potent force of healing here.”
“Indeed,” replied Berrian, inclining his head in respect for Wjizzo’s learning. “But whilst the power of the font can be invoked to remove many afflictions, it has no magical power over common wounds.”

The Fairy Ring took their leave of the Velfarrens, and followed their directions to the path that wound through the grove to the Bell Tower where they had saved Analastra, and beyond, towards the top of the mount.

At the last bend in the steeply climbing path a couple of them heard the strains of an enchanting music, which Wjizzo identified as being sung by Autumn Nymphs — the tantalising “gossiping nymphs” mentioned by Berrian. He knew they would command many secrets that it might be gainful to know, but that the cost might be too high, particularly if Cram , Percival or Fosden might unwittingly become ensnared in the nymphs’ games.
“Pay no heed!” he directed. “Wood nymphs are perilous to those unaccustomed to their ways.”

The path led them next to emerge from the Feygrove, and onto the treeless hilltop dominated by the fire-blackened shell of a great temple. All seemed ruined and desolate, but Fosden said to the others, “There is an enemy here. I sought to come to Gardmore Abbey because Grundelmar the priest of Pelor in Fallcrest was visited by dreams from Pelor in which the Sun Lord told of a man named Vadin Cartwright, pledged to the Mad God, dabbling with forces beyond mortal understanding among the dead in Gardmore Abbey.”

All were wary of the temple itself, in some way that was unspoken but shared by all but Cram. Their first dilatory investigations were therefore made into a mostly ruined building to the left of it, at the southern end of the hilltop. Within one gaping entrance to the low structure they saw ruined and blackened features suggestive of a barracks and mess-block. But the walls and roof were mostly collapsed, and there was a mass of broken masonry and roof tiles immediately inside the entrance.
“Stairs down,” said Wjizzo authoritatively.
But before he could elaborate, they heard a slithering, scuttling noise from just beyond the .
“Milf’s Acid Arrow!” barked Wjizzo, unleashing one of his more powerful spells. A great bolt of lurid green energy gouted forth from his casting-orb and arced over the rubble to strike a sizzling impact. There came the shriek of an angered beast and an acrid steam rose, followed by the rearing form of a carrion crawler. 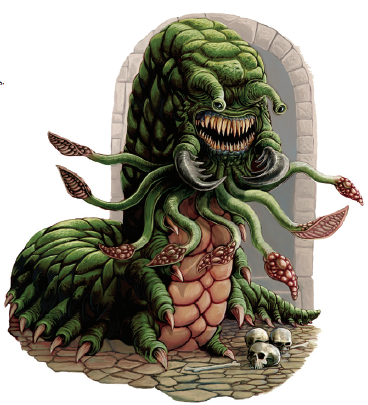 Wjizzo was already behind Cram and Varris before anyone noticed. And no one was surprised that Percival seemed to have disappeared…

The Barracks and Below Smite them like the dogs they are