The Barracks and Below

Wjizzo’s ancient ivory card named “Ruin” comes from a larger deck. There’s certainly a strange power in the card, and the magic of the Deck is surely greater than the magic of the individual cards.

Lord Padraig of Winterhaven said: “I suspect that the orc raiders preying upon the King’s Road lair in the ruins of Gardmore Abbey. To start with, find out whether they are on that site and if they are, give me as complete a picture of their lair and defences as you can.”

Valthrun told you there is a tower in the village below the abbey, which believes to be the location of The Winterbole Codex, a tome bound in white dragon scales, which he would much like to get to read.

Quoth Grundelmar in Fallcrest to Fosden: “Years ago, adventurers destroyed a cult of the Elder Elemental Eye but the leader, Vadin Cartwight, escaped. Well, the Sun Lord has spoken in my dreams to let me know that Cartwright is still a danger. He is dabbling with forces beyond mortal understanding that could be disastrous, and must be sought among the dead in old Gardmore Abbey.”

Sir Berrian Velfarren said: “My ancestors had a hand in the the establishment of this grove, and your Lord Padraig will recognise our rightful claim here if the proof of it can be demonstrated.”

In the Ruin of the Barracks

Eric Bloodhammer, whose explanation for being here was that he “used to be a religious bod,” had scouted the building. He identified that it had originally been a barracks block and mess hall for the knights of Bahamut. “Used to work in these places, what.”
“Used to?”
“Fell from grace, don’t you know? I was terribly, terribly drunk. All I remember is someone crying, ‘The gorgon’s alive!’ Might even have been me…”

The rubble didn’t lie where it had fallen, but had been piled, in the absence of any better material, into makeshift fortifications for the defence of the surviving parts of the building, and especially the head of the staircase Wjizzo had previously spotted. Though Valthrun had told them, back in Winterhaven, that the Siege of Gardmore Abbey had failed when the paladins suffered a terrible attack from within, these defences were not arranged against enemies emerging from below, but for a step by step retreat defending whatever was below from incoming attack. Cram vividly imagined civilians and wounded packed into the cellars for cover from dragon-fire, protected by the heroic but doomed efforts of a last few brave knights.
Still stricken by the double loss of Varris the Scarred (killed in action) and Percival (missing in action), the shrunken group plus Eric Bloodhammer were wary of exposing their rear to any peril. Before committing to anything further, they opted to gauge the locale, and Fosden resolved to survey the area from a position of watch on an intact part of the barracks roof. His first attempt pulled loose a section of wall in a clattering tumble, but after a few moments with everyone’s hearts in their throats, they realised this had not brought any more carrion crawlers, land-sharks or anything else upon them.

The hour passed quietly, and dawn broke in the east. The distant hubbub from the orcs in the ruined village on the north-easterly aspect of the hill subsided, and the dozen or more plumes of campfire smoke dwindled. It seemed like the start of a pleasant day, marred only by two discoveries.
“F— spiders!” exclaimed Cram, to everyone’s alarm. But it was a favourite exclamation of his, and the two spiders in question were no more than an inch across, and a good couple of feet away from Wjizzo’s elegant shoes. Wjizzo recognised them to be of a species called the bloodweb spider, common to both the Feywild and this world, and harmless enough individually but aggressive when massed in a swarm. The adventurers were right to stick close together, and to remain cautious in their further scouting of the ruins.
And the great doors on the colonnaded building on the west of the plateau were burst open by a minotaur soldier who stomped his way off north towards the gatehouse-looking building before passing out of sight from Fosden’s vantage point.
But Dragon’s Roost, though full of threat, offered no immediate dangers and the party judged it safe to venture down the stairs beneath the barracks.

Wjizzo’s wizard-light revealed a flight of steps leading down at a steep pitch, the staircase fully ten feet across and the steps too deep to be comfortable for a human gait. They descended a long way round frequent left-hand turns, beyond the depth of any normal cellar. Some way down the party discovered deposits of excrement, fresh enough to be giving off an unwholesome stink, but located tactfully against the walls.
“These are sentient turds,” opined Wjizzo, to quizzical looks from the others. “If that means there might be listeners…” The hint was all it took to have everyone soften their step.
But after only a few steep stairs more, the clanking Eric incisively identified the best tactic. “Charge!” he yelled (just like his poor deceased father before him).
Everyone surged forward in his wake and they rounded the last corner in reasonable order, to see a great gangling gnoll step to the foot of the stairs.
“Go see what the f— that is!” came a snarled command from somewhere beyond. 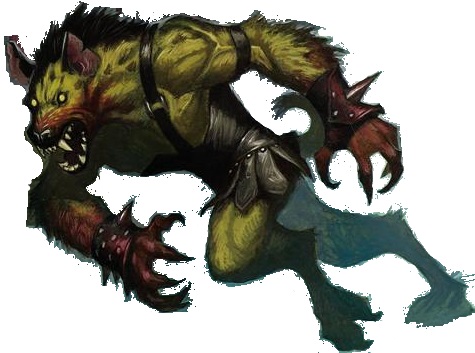 The gnoll was armoured in leather adorned with gruesome fetishes but unarmed, flexing its great long arms as to attack with nothing more than its own claws.
Fosden shot his bolt desperately awry but, with his instinct for safety, managed not to shoot his companions. Eric bore down with his hammer to strike the gnoll a mighty blow, Cram’s fullblade attack a heartbeat later staggered it yelping back, but Wjizzo’s sword-strike failed to connect.
“Take one alive!” called Fosden, somewhat distracted by the bull-and-sun murals and the reflective pool that suggested this to have been built as a rare subterranean shrine to his own god, Pelor.

“We don’t know how many of the f—ers there are. Fall back to the others!” came a barked command from a gnoll away to the right.
“Mind your language!” demanded Eric.
The leader and the other two gnolls backed up to a doorway, the one with a bow loosing an ill-aimed arrow in the vague direction of the intruders. The gnoll beset by the three attackers tried to feint fowards and bound away, but found a weapon in his path at every attempt.
“Come on then, you filth, I’ll take youse all!” he howled. “Nebrix, get out of here!” And with that he lurched around in a wild arc, claws flashing out almost impossibly fast, buffeting and raking Cram, Eric and Wjizzo.

“Pelor preserve you,” intoned Fosden, extending a degree of the Sun Father’s protection to his comrades, before raising his voice louder. “AND SPIRITS STRIKE DOWN THE DEFILER OF THIS TEMPLE!” Beams of pure sunlight lanced forth from his medallion to strike Nebrix the gnoll pack lord, who recoiled shrieking in pain.
Neither Eric nor Cram could strike properly against the ravening gnoll between them, but a lunge from Wjizzo drew blood from its furry flank.

Nebrix shook off his pain and backed off through the door at the same time as retaliating with a focus of some strange force of insanity upon Fosden. Wjizzo’s instinct was to raise an arcane counter, giving Nebrix some alarm and forcing him to snarlingly redouble his will. Fosden succumbed and a canine howl escaped his throat as he drove his spear first at Eric’s back, glancing off his armour, and then at Wjizzo. The elf’s Shield spell failed to deflect the attack, and Fosden’s spear stabbed into his belly. Wjizzo crumpled to the floor and Fosden was left in a state of shock. The magelight upon Wjizzo’s casting orb winked out to leave the room lit only by a flickering flame-like glow from a sacred circle opposite the pool.

Just barely regaining mastery of his own limbs, Fosden bestrode Wjizzo’s body deny it to the frenzied claw-attacker but found himself scarcely able to wield his spear effectively.
“Radiant One, shine the light of your mercy upon this fallen one,” he prayed, and gentle light broke upon the benighted elf’s form as though he lay in a sunlit glade.

The bloodsoaked gnoll goaded Cram and Eric, dancing just beyond reach of everyone’s weapons and drawing them after him as he bounded backwards into the defiled pool of Pelor. Cram halted at the brink, resisting the urge, but Eric steamed in. An unwholesome power in the water shuddered him, but he purposefully struck the cur down with his hammer.

“You sons of cows!” came Nebrix’ improbable curse at the death of his packmate, as Eric lost no time in heaving himself back out and onto the stone floor.
“I can deal with this,” said Wjizzo from a half-sitting position. “Cram! Close the door on them!”
The Son of the Thumpers shot forward. He noted at least another three gnolls in the room beyond answering Nebrix’ calls, then crowed “No more walkies for you!” and slammed the door upon them.
Two arrows struck the timber right where Cram stood, and then Wjizzo’s spell of holding wrapped the door in force. Several heavier thumps failed to make the door so much as quiver.
“We have time,” said Wjizzo. “Not long, but enough to get safely away from here.”

The Battle of the Wagon Winterhaven, and Ambushing the Ambushers

A Dilatory Day Pelor comes, Fosden goes, and the others watch...

Onwards and upwards Where they reach Dragon's Roost