NPC; originally an NPC healer recruited mid-Keep on the Shadowfell, and a PC for much of Thunderspire

She first gave support from the sidelines, then led from the rear.
Then, where a goal could not be won with intelligence, negotiation and moral decency, she donned armour and fearlessly wielded sword and shield into the fray.

But a year and a half of normality have seen her return to the softer ways of a travelling minstrel, and one of the most widely-loved people in the whole Nentir Vale.

Most recently, when Wjizzo revealed to her that he had come by a mysterious ivory playing card, Elana and he made various researches about it. When they identified it as a part of the fabled Deck of Many Things, Elana toured the Vale bringing the old Ringers back together once again. 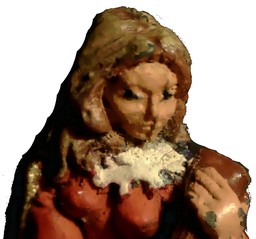